The Bears will release Mike Glennon this offseason, GM Ryan Pace told reporters on Wednesday morning. By cutting Glennon, the Bears will save $11.5MM against the cap with $4.5MM in dead money remaining. 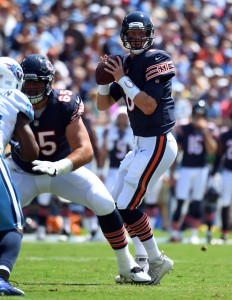 The Bears were widely criticized last offseason when they signed Glennon to a three-year, $45MM contract. Despite entering the league in 2013, Glennon had limited on-field experience. As a rookie, Glennon started 13 games for the Bucs, completing 59.4% of his passes for 2,608 yards, 19 touchdowns, and nine interceptions. But, between 2015 and 2016, Glennon threw just eleven passes as Jameis Winston’s understudy. Glennon got his big money deal with a 5-13 record as a starting QB.

Glennon’s second run as a starting QB did not last long either. Six weeks after signing Glennon, the Bears shocked the world by trading up to draft UNC signal caller Mitch Trubisky. One month into the season, Glennon got the hook in favor of the No. 2 overall pick. Glennon will once again be a free agent, this time with a 6-16 career record as a starter.

Glennon, 28, earned $18.5MM for his four starts in Chicago. The deal was a bust in retrospect, but to the Bears’ credit, they did structure the deal to give themselves an easy out after one season.