The Bears’ offense is looking downright scary. Chicago has agreed to sign wide receiver Taylor Gabriel to a four-year deal, according to former NFL player Andrew Hawkins (on Twitter). The news has been confirmed by Peter Schrager of NFL.com (Twitter link). 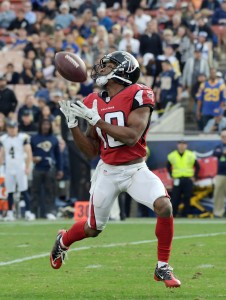 The four-year deal is worth $26MM, according to Ian Rapoport of NFL.com (on Twitter). The deal includes $14MM guaranteed with a maximum value of $28MM.

Earlier this month, Gabriel bid farewell to the Falcons as he anticipated better offers to come in from other teams. He found the proposal he was seeking from Chicago, which has changed its offensive attack for the better.

In 2016, Gabriel put himself on the map with 35 receptions for 379 yards and six touchdowns. Last year, those numbers dropped off a bit with 33 receptions for 378 yards and one score. Still, he brings lots of speed to the Bears’ passing game, which also now includes free agent pickups Allen Robinson and Trey Burton.

After settling for bargain buys last year in the form of Markus Wheaton and Kendall Wright, the Bears committed to serious shopping this year. Chicago has been extremely active in free agency thus far, allocating much of its cap space to helping a passing game that injuries decimated last season.

The Bears were without Cameron Meredith and Kevin White last season, with tight end Zach Miller going down with a scary injury as well. The team tendered Meredith, an RFA, at the original-round level and still has White under contract. But Robinson, Burton and now Gabriel are going to play key roles in the Windy City.

Once waived by the Browns, Gabriel then caught on as a key target for the NFC champion Falcons in 2016. The six touchdowns Gabriel caught that year, though, represent three-fourths of Gabriel’s TDs over a four-year career. His per-catch average plummeted by five yards, to 11.5, in 2017. But he wasn’t the only Falcon to produce worse numbers in Steve Sarkisian‘s offense compared to Kyle Shanahan‘s.

Now, Mitch Trubisky will have a chance to develop a rapport with several playmakers with higher-end potential.