The Raiders trying to finalize deal today for former Packers wide receiver Jordy Nelson, according to Adam Schefter of ESPN.com (on Twitter). Nelson visited the Raiders on Wednesday and he remains in Oakland today. 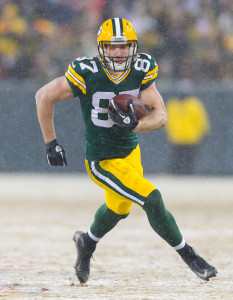 “This is going to get done,” one source familiar with the talks tells Schefter.

If the Raiders land Nelson, they’re likely to cut fellow wide receiver Michael Crabtree, Ian Rapoport of NFL.com (on Twitter) adds. Crabtree is set to carry a $7.7MM cap hit, a number that, truthfully, does not seem all that high given the boom of the free agent wide receiver market in recent days. Money aside, it seems like new head coach Jon Gruden simply prefers Nelson to Crabtree.

Nelson also had visits with the Seahawks and Saints on the docket, but, at this rate, he won’t be making those trips. If things go as planned, Nelson will be signed to serve as the No. 2 wide receiver in Oakland, behind Amari Cooper. The Raiders also plan to return Seth Roberts and Cordarrelle Patterson, as shown on Roster Resource.

This marked the first ever trip through free agency for Nelson, who turns 33 in May.