The Rams will reunite Aqib Talib and Wade Phillips, and the Broncos will receive compensation for a cornerback they’ve been trying to unload.

Los Angeles agreed to acquire Talib from Denver on Thursday, James Palmer and Ian Rapoport of NFL.com report (on Twitter). This continues a busy offseason for the Rams, who will now have two of the best corners to come through the AFC West this decade on their team. 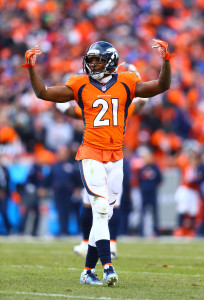 Talib will net the Broncos a fifth-round pick, Adam Schefter of ESPN.com reports (on Twitter).

The 32-year-old cornerback has two years remaining on the six-year Broncos-constructed contract and will count $12MM toward the Rams’ cap this season. This trade won’t involve any adjustment to Talib’s contract, Mike Florio of Pro Football Talk reports (via Twitter).

Schefter reports (on Twitter) Talib wanted to again play for Phillips or Bill Belichick, and this helped dictate the trade terms. The 49ers and Patriots had surfaced as suitors who discussed the 11th-year cornerback with the Broncos, but Denver dealt with the Rams and pair Talib and Marcus Peters.

While the Rams are gambling on a tandem featuring two polarizing corners, they now have two of the three corners from the 2016 All-Pro first team. The Broncos previously enjoyed that setup, with Talib and fellow ’16 All-Pro Chris Harris being a four-season tandem for a dominant defense, but Talib’s age and salary did not line up for a team that is pursuing the most expensive free agent in NFL history in Kirk Cousins.

In Peters and Talib, the Rams will have two of the NFL’s best defensive playmakers. Peters is on a record takeaway pace for a cornerback, and Talib sits fourth in NFL history with 10 interceptions returned for touchdowns. That figure leads all active players by three.

While known plenty for his on- and off-field antics that caused headaches and suspensions, Talib has been one of the NFL’s best cornerbacks for many years. He stabilized his career in Denver and was a four-time Pro Bowler since signing with the Broncos in 2014. The former Patriot was a key component of a 2015 Broncos defense that became an all-time great unit, helping Denver to a third Super Bowl title. And Talib thrived under Phillips a year later as well en route to his first All-Pro honor.

Talib will reunite with Kayvon Webster, who may be the only notable corner to see time for both the 2017 and ’18 Rams. The Rams have now agreed to trade for Peters and Talib and also took a flier on former Packers top corner Sam Shields. Trumaine Johnson is expected to depart, and Nickell Robey-Coleman may follow him out of L.A.

The Rams continue to vacillate between shedding salary and taking on money in blockbuster trades. They’ve also created significant cap space over the past week by trading Robert Quinn and Alec Ogletree away, with Tom Pelissero of NFL.com (Twitter link) categorizing the departing players as poor fits for Phillips’ scheme.

The Broncos now have 11 picks in the coming draft and have created $11MM in cap space, pushing their total north of $35MM. While that’s still less than the Vikings or Jets — the other primary Cousins suitors — have, it puts the franchise in better position to make a competitive offer.