The Broncos have agreed to sign Case Keenum, according to Adam Schefter of ESPN.com (on Twitter). It’s a two-year deal for at $36MM, as Mike Florio of PFT details. All $36MM of the deal is guaranteed for injury and $25MM of the contract is fully guaranteed. 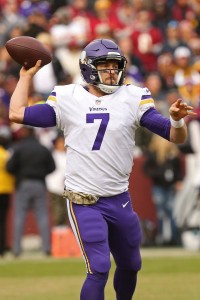 We heard on Monday that Keenum might not wait for Kirk Cousins to sign first and that is exactly the case. Keenum saw an opportunity and an offer that he liked with the Broncos, and he took it.

The deal means that there are likely three teams in on Cousins – the Jets, Vikings, and Cardinals. The Broncos were thought to be suitors, but Cousins was apparently too rich for their blood.

One year ago, no one would have expected Keenum to be one of 2018’s most sought-after free agents. The Vikings signed the former Rams signal caller to a one-year, $2MM deal in March with the idea that he would back up Sam Bradford and, eventually slide down to third on the depth chart when/if Teddy Bridgewater returned to full health. When Bradford went down in September, Keenum exceeded all expectations and put together the best season of his career.

The 30-year-old graded out as Pro Football Focus’ ninth-ranked QB in 2017, putting him above the likes of Jimmy Garoppolo, Aaron Rodgers, Marcus Mariota, Matthew Stafford, and Tyrod Taylor. With Keenum at the helm, the Vikings earned a first-round bye and beat the Saints in a playoff thriller before succumbing to the Eagles in the NFC championship game. Of course, after four seasons of mediocrity, teams are wondering whether this was an aberration or a real sign of things to come. The Broncos, of course, are in the latter camp.

Keenum, a career journeyman who inked a one-year, $2MM pact with Minnesota last offseason, posted the best season of his career in 2017 while leading the Vikings’ offense to a No. 5 finish in offensive DVOA. The 30-year-old ranked seventh in passer rating and ninth in adjusted net yards per completion during the 2017 regular season, and finished first in Football Outsiders‘ individual DVOA metric.

Keenum now reunites with Broncos senior personnel advisor Gary Kubiak, who brought him into the league as an undrafted free agent with the Texans and eventually made him his starting quarterback. Broncos head coach Vance Joseph was also on that same Texans coaching staff.