Jon Gruden vowed to restore the importance of the fullback position and he took a major step towards that endeavor on Thursday. The Raiders and fullback Keith Smith have agreed to terms on a two-year worth $4.2MM, Ian Rapoport of NFL.com tweets. 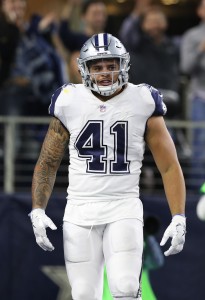 Smith, 26 in April, was non-tendered by the Cowboys this week. He quickly drew interest on the open market, not just from the Raiders, but the Falcons as well.

Smith is undoubtedly happy about the way things turned out. Had he been tendered by Dallas, he would have made just $1.908MM in 2018.

The Cowboys only used Smith on 12% of their snaps last season, but he could be in for an uptick in playing time with the Raiders, particularly since former Dallas special teams coordinator Rich Bisaccia is in Oakland.

It remains to be seen exactly who he’ll be doing the lead blocking for, however. The Raiders inked Doug Martin to a one-year deal on Thursday and Marshawn Lynch‘s status remains murky.