The Seahawks and Jaguars both plan to meet with free agent tight end Austin Seferian-Jenkins, according to Josina Anderson of ESPN.com (Twitter link). Seattle will get the first shot at Seferian-Jenkins, tweets Ian Rapoport of NFL.com. 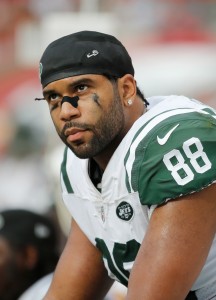 ASJ is drawing plenty of interest on the open market, and while the Seahawks and Jaguars will host him in the coming days, they aren’t the only clubs targeting the former second-round pick. Both the Saints and Falcons have also been connected to Seferian-Jenkins, who spent the 2017 campaign with the Jets.

Seattle is on the lookout for a new tight end after losing veteran Jimmy Graham to the Packers on Tuesday. While the Seahawks still have Nick Vannett on their roster, the club could use an established starter. Jacksonville, meanwhile, recently exercised its 2018 option for Marcedes Lewis, but Seferian-Jenkins would offer an upgrade on the longtime Jaguar.

In 13 games (10 starts) a season ago, the 25-year-old Seferian-Jenkins posted 50 receptions for 357 yards and three touchdowns. While his 50 catches ranked 13th among tight ends in 2017, Seferian-Jenkins doesn’t offer much as a blocker, as Pro Football Focus ranked him as just the 35th-best run-blocker.

Pro Football Rumors currently ranks Seferian-Jenkins as the No. 4 available tight end and the No. 37 free agent overall.