Terrell McClain is visiting with the Dolphins, but there are other clubs interested in his services. The Falcons have expressed some interest in McClain, according to Vaughn McClure of ESPN.com (on Twitter), though they have yet to schedule a visit with him. 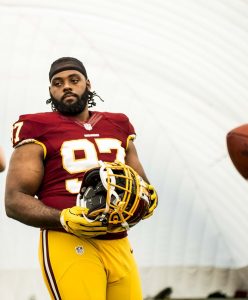 McClain made a name for himself while with the Cowboys, particularly in 2016 when he started in 15 contests. Last year, he signed a four-year, $21MM+ free agent deal with the Redskins, but was bumped down to more of a reserve role. This week, the Redskins released him rather than keeping him on board for a (non-guaranteed) base of $3.25MM.

The Falcons are pretty well set at defensive tackle with Grady Jarrett, Jack Crawford, and rookie Deadrin Senat. Still, they could use some reinforcements after losing Dontari Poe this offseason. The recent extension for franchise quarterback Matt Ryan opened up a bit of cap space for Atlanta this season, so they have the flexibility to sign McClain to a low-cost deal.