The Falcons have locked up their franchise quarterback. Matt Ryan has agreed to a five-year, $150MM extension with the team, Tom Pelissero of NFL.com tweets. The deal includes $100MM guaranteed, setting a new all-time record for signal callers. Ryan is now under contract through the 2023 season, keeping him in place through his age-38 season. 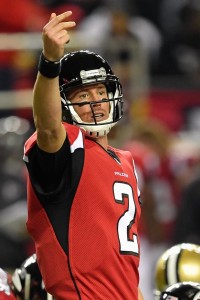 Ryan has thrown for 41,796 yards over the course of his ten-year career with 260 touchdowns against 126 interceptions. In the 2016 season, he became the first Falcons player to win the league’s MVP award as he guided Atlanta to its second Super Bowl appearance. Ryan threw for nearly 5,000 yards in the regular season and completed 71.4% of his passes in the playoffs with zero interceptions.

Ryan set a high standard with his play in 2016, but he had a strong follow-up effort last year. The 32-year-old (he’ll 33 in two weeks) threw for 4,095 yards and tied for second place with Drew Brees amongst all QBs in terms of performance, per Pro Football Focus.

The Falcons passer is now the league’s highest-paid player, but as it usually goes for quarterbacks, he probably won’t hold that title for very long. Assuming that Aaron Rodgers and the Packers are on the same page, Rodgers figures to be next in line for a high-paying extension that will likely top Ryan’s. Ryan’s deal is also good news for young QBs Jameis Winston and Marcus Mariota as the Bucs and Titans look to keep them out of the free agent pool in 2019.

Ryan’s $30MM average annual value tops the $28.8MM AAV of Kirk Cousins‘ free agent deal with the Vikings, making him the highest-paid QB in the league on a per-season basis. After that, Jimmy Garoppolo ($27.5MM), Matthew Stafford ($27MM), and Derek Carr ($25MM) round out the top five.

This year, Ryan will look to get the Falcons back in the Super Bowl mix with an offense that is as potent as ever. After losing wide receiver Taylor Gabriel to free agency, the Falcons landed Alabama’s Calvin Ridley late in the first round, a player who many feel could be the best receiver to come out of this year’s class. He’ll learn from superstar Julio Jones and Mohamed Sanu while Devonta Freeman and Tevin Coleman continue to wreak havoc out of the backfield.