For now, it sounds like the Giants and Ereck Flowers will be moving forward together. The former first-round pick returned to work on Monday after missing the team’s previous offseason program, Adam Schefter of ESPN.com tweets. Schefter hears a trade is still an option, but right now the plan is for the Giants to play him at right tackle. 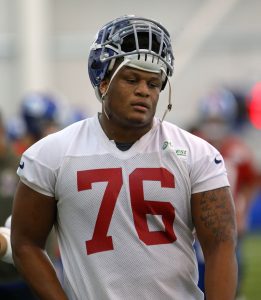 Flowers was reportedly upset about the Giants’ signing of left tackle Nate Solder this offseason, but it’s not hard to see why the Giants wanted an upgrade at the position. Despite some serious buzz that led to him being taken No. 9 overall in 2015, Flowers has yet to do much at the pro level. Last year was his best season to date and he graded out as just the No. 54 tackle in the NFL out of 81 qualifiers, per Pro Football Focus. Meanwhile, in a “down year,” Solder was the 32rd ranked tackle, per PFF. In previous years, he placed as one of the league’s best.

The Giants will pit Flowers against second-year UDFA offensive tackle Chad Wheeler, 2018 UDFA Tyler Howell, and others for the right tackle job and it wouldn’t be surprising to see another veteran or two thrown into the mix. Ideally, the Giants would probably like to move on from Flowers altogether, but teams balked when asked to part with a mid-round pick for him last month.

Given the dearth of quality tackles available, the Giants could have better luck unloading Flowers this summer in the event of an injury to a starter. For now, the Giants will see what he can do on the opposite side.

One comment on “Giants’ Ereck Flowers Reports To Team”