Vincent Jackson is “very happily retired” from the NFL, a representative for the wide receiver tells Jeremy Fowler of ESPN.com (on Twitter). Jackson has played in over a year-and-a-half, so the news was largely expected. 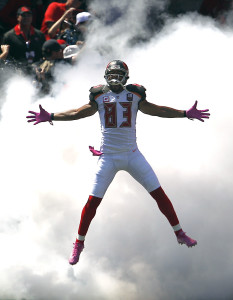 Jackson appeared in three Pro Bowls over the course of his 12-year NFL career with the Chargers and Buccaneers. His last NFL season in 2016, however, did not go according to plan. That campaign ended after just five games due to a serious knee injury.

Now focused on community and business work in the Tampa, Florida area, the 35-year-old has fully transitioned into post-NFL life. He leaves the game with 9,080 receiving yards and 57 touchdowns and six individual seasons with 1,000 yards or more.

Jackson entered the league as a second-round pick of the (then San Diego) Chargers in 2005. Injuries hampered him as an NFL freshman, but he eventually blossomed into a dangerous receiving threat. A contract dispute later soured his relationship with Bolts brass, leading him to sign a five-year, $55.55MM free agent deal with the Bucs in 2012. Things started with a bang in Tampa as he enjoyed a career year with 72 catches for 1,384 yards and eight touchdowns. His eye-popping of 19.2 yards per catch led the NFL that year.

After a successful and lucrative NFL career, Jackson has decided to focus on other endeavors. It sounds like he’s settled into post-football life, even if Jon Gruden calls him up.