Patriots owner Robert Kraft says last week’s trade buzz surrounding Rob Gronkowski was nothing but “hogwash.” However, it sounds like the Patriots did explore trading the tight end earlier in the offseason. The Pats were calling other teams about a possible Gronkowski trade as recently as three days before the draft, a league source tells Mike Florio of PFT. 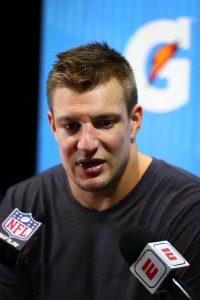 Incidentally, Gronkowski decided against retirement just two days before the draft, so one can’t help but wonder if the two events were related. It’s not clear how close the Patriots were to trading Gronkowski in the spring, or what they were seeking, but the notion of trading the tight end has at least been considered in New England.

In 2017, Gronk was on the field for 14 games, and managed 69 receptions, 1,084 yards, and eight touchdowns, all of which placed him within the top five among tight ends. When healthy, he is the most fearsome offensive weapon at his position and among the most dynamic talents in the game.

Gronk, who is signed through the 2019 campaign, is scheduled to earn a base salary of $8MM in 2018. New England has reportedly been working on “tweaking” his deal, but nothing has been agreed upon just yet.