When linebacker Rolando McClain was handed a 10-game suspension on this date in 2016, it was assumed he’d be back for the Cowboys’ late-season run. However, two years later, it’s uncertain if the 28-year-old will ever play in the NFL again. 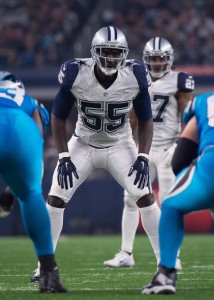 The 2010 first-round pick had three productive seasons with the Raiders, although it was accompanied by its fair share of controversy. In 2012, he was booted from team practices after several incidents, and McClain subsequently took to Facebook to complain about the organization, going as far as to say that he wanted “to be anywhere besides here.” He was released by the team the next offseason before briefly catching on with the Ravens. However, less than a month after signing with Baltimore, McClain suddenly announced his retirement.

The Cowboys then took a bit of a risk trading for the linebacker in 2014, despite the fact that McClain had sat out the previous season. It ended up paying off for Dallas, as the linebacker would go on to appear in 13 games for his new team, compiling 81 tackles, one sack, and one forced fumble. He earned his first suspension from the NFL the following offseason, limiting him to only 11 games in 2015, although he still collected 80 tackles and a pair of sacks.

After signing another one-year deal with the Cowboys during the 2016 offseason, McClain was handed the 10-game suspension for violating the league’s substance abuse policy. He then failed another drug test midway through the season, and the NFL slapped him with an indefinite suspension. Following his third ban in two years, it doesn’t sound like McClain will be making a return anytime soon. Since he was suspended indefinitely, we’ve only heard one bit of news about McClain: a 2017 arrest for firearm and drug charges.

Two years ago today, the Cowboys were surely disappointed hearing about McClain’s suspension. However, it’s unlikely they would have thought that he’d be out of the NFL two years later.

One comment on “This Date In Transactions History: Rolando McClain”