The Browns have signed quarterback and No. 1 overall selection Baker Mayfield, the club announced today. 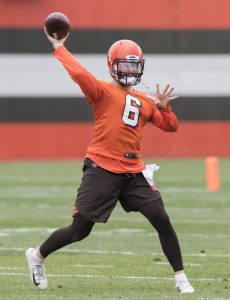 According to Over the Cap, Mayfield’s four-year deal should be worth roughly $32.683MM in total, and will also give Cleveland a fifth-year option season in 2022. Mayfield will collect a ~$21.849MM signing bonus, and count for approximately $5.942MM on the Browns’ 2018 salary cap.

Mayfield had been one of only six 2018 draft picks without a contract in place, and offset language was reportedly holding up the deal. Players with offset language in their contracts who are cut before the end of their rookie deals have their remaining guaranteed money reduced by what they earn elsewhere. Mayfield’s pact does indeed contain offset language, tweets Mary Kay Cabot of Cleveland.com.

Even after using the first overall pick on Mayfield, the Browns have been adamant that veteran Tyrod Taylor — whom Cleveland acquired from Buffalo for the cost of the 65th overall selection — will be the club’s Week 1 starter. Still, the Browns, who face a difficult opening schedule, could conceivably insert Mayfield under center later in the season.

Cleveland still has one more draft pick to sign in cornerback Denzel Ward, the fourth overall pick in April’s draft.