DeMarco Murray is without a job at the moment, but he’s hoping that will change soon. In a lengthy interview with ESPN.com’s Adam Schefter (audio link), Murray reaffirmed his desire to play in 2018 and said that he has had a handful of fruitful conversations with clubs. 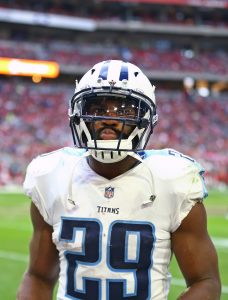 [POLL: Who Is The Best Free Agent RB Remaining?]

“I’ve had a lot of discussions with four or five teams that I feel will be a great fit for me,” Murray said. “It’s all about being transparent and, for me, I’m not looking to lead the league in rushing yards. Obviously I would work and do everything to give me the opportunity to do that, but it’s all about having an opportunity to get to the playoffs and have an opportunity to win a championship.”

It sounds like Murray has accepted the limitations of what he can do at this stage of his career. Although he led the league with 1,845 rushing yards in 2014 with the Cowboys and nearly cracked 1,300 in 2016 with the Titans, it appears that he is willing to enter the year as a team’s No. 2 running back. That’s good news because, barring an injury, no team at this stage of the offseason would realistically consider Murray as a starter.

Last year, Murray was overshadowed in Tennessee by Derrick Henry. He totaled just 659 yards rushing and averaged 3.6 yards per carry. On the plus side, he also had 39 catches out of the backfield for 266 yards.

The Titans released Murray in March and he has not found a new NFL home despite meeting with the Lions, Seahawks, and Dolphins since his release. In June, the 30-year-old declined an opportunity to work out for the Saints. That same week, the Saints signed former Ravens running back Terrance West.

According to the advanced metrics at Pro Football Focus, Murray graded out as the league’s No. 40 ranked running back in 2017.