Jeff Fisher recently said that he is still eyeing an NFL head coaching job, though he does not want to work as a coordinator or assistant in the interim. In keeping with that, Fisher could stay involved in the football world as an analyst. FOX Sports is talking to Fisher about serving as one of its NFL game analysts this season, sources tell Michael McCarthy of the Sporting News. 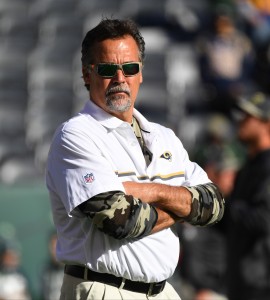 Fisher was not seriously considered for any head coaching vacancies this offseason, even though he was reportedly eyeing jobs with the Colts, Browns, and Bears. The Bears hired Matt Nagy, the Colts went with Frank Reich, and the Browns retained Hue Jackson despite speculation that his job was in jeopardy. Fisher has connections throughout the NFL, but those contacts did not yield an interview this year.

Fisher boasts 22 years of head coaching experience, but he has five 8-8 seasons and four 7-9 seasons (plus one 7-8-1 campaign) on his record. Those numbers largely overshadow his successes, including his multiple playoff teams in Tennessee.

In his nearly five year run with the Rams, Fisher went 31-45-1 with no playoff appearances. He had better success with the Titans, though they reached the Super Bowl just once in his 17 years at the helm. Overall, Fisher owns a career 173-165-1 regular season record.

It’s not immediately clear whether Fisher would serve as a color commentator for FOX or as a studio analyst.

12 comments on “FOX May Hire Jeff Fisher As Analyst”