The Giants are expected to sign veteran outside linebacker Connor Barwin, a source tells Jordan Raanan of ESPN.com (on Twitter). The addition of Barwin will give the G-Men some much-needed depth at the position and a quality veteran presence. 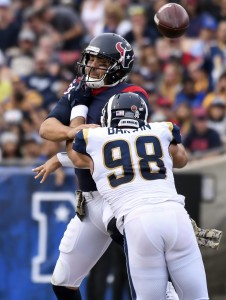 Barwin’s relationship with linebackers coach Bill McGovern likely helped to foster the deal. The two worked together in Philadelphia, where Barwin played as a starter from 2013-2016 and earned a Pro Bowl nod. McGovern was Barwin’s positional coach for his first three years with the Eagles.

This has been a surprisingly quiet offseason for Barwin. In June, Barwin was included on our list of the best remaining free agents, but there weren’t a lot of calls made on the 31-year-old. In, April that the linebacker visited with the Cardinals, and Rams general manager Les Snead had expressed interest in bringing him back for a second season in Los Angeles. Otherwise, there were no other reported workouts or visits for the former second-rounder.

The Giants’ rotation at edge rusher is headlined by standout Olivier Vernon, but there are lots of question marks outside of that. Barwin probably stands a good chance of making the cut as a reserve – particularly since he does his best work in a 3-4 scheme – but he’ll have to prove himself between now and September.

Following a four-year stint with the Eagles, Barwin signed a one-year, $6.5MM deal with the Rams last offseason. He managed to put up solid numbers for his new team, compiling 34 tackles and five sacks in 14 games (13 starts). However, advanced metrics weren’t kind to the nine-year veteran, as Pro Football Focus ranked Barwin as the third-worst pass rusher in the NFL among 106 candidates.