Raiders’ Mack Has Yet To Speak With Gruden

Is there real trouble brewing in Oakland? Defensive end Khalil Mack and Jon Gruden have not spoken once since the Raiders hired their new coach in January, Adam Schefter of ESPN.com (on Twitter) hears. 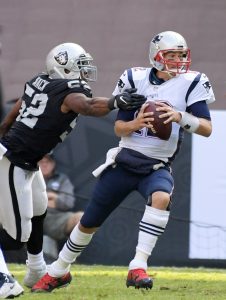 The Raiders are presently in a standoff with Mack, who is staying away from the team as he pushes for a new contract. Mack is obviously a big part of the puzzle in Oakland, so it’s shocking to hear that there has been no communication between him and Gruden over the last seven months.

Mack has averaged 12 sacks per season over the last three years. Last year, he graded out as the fifth best edge rusher in the entire league, per Pro Football Focus.

As it stands, Mack is slated to reach unrestricted free agency following the 2018 season. He’s scheduled to earn $13.846MM, per the terms of his fifth-year option. His deal accounts for nearly 8% of the Raiders’ salary cap, and he is likely seeking a deal that will give him a similar piece of the pie over a six-year span, even as the cap continues to increase. So far, talks have dragged.

4 comments on “Raiders’ Mack Has Yet To Speak With Gruden”