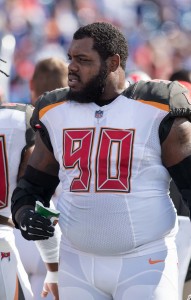 Cincinnati inked Baker to a one-year, $2.45MM deal in March in the hopes that he’d become its starting nose tackle opposite All-Pro three-technique Geno Atkins. Not only has Baker struggled during the preseason, often getting defeated in both the run and pass game, but he’s been severely outplayed by third-year pro Andrew Billings, who will now play alongside Atkins on the Bengals’ defensive line.

Baker will now join a list of free agent interior defenders that’s still rather deep, as options such as Johnathan Hankins, Courtney Upshaw, Jared Crick, and Tony McDaniel still reside on the open market. With just a few weeks until the 2018 regular season begins, Baker could struggle to find a job immediately (especially given that he’s been cut twice in the span of six months), and may need to wait for an injury to open up a job.

The Bengals will trot out Atkins and Billings as their starting defensive tackles, while 2017 fourth-round pick Ryan Glasgow will now become the clear third man on the depth chart. Baker’s release opens up a roster spot for rookie fifth-round selection Andrew Brown, who’d been on the roster bubble in recent weeks.

Baker collected a $300K signing bonus when he signed with Cincinnati, and he’s also picked up $150K in workout bonuses. That $450K will become dead money on the Bengals’ salary cap, but they’ll clear $1.5MM in base salary and $500K in per-game roster bonuses by cutting ties with Baker.