The Jets reached out to the Jaguars to gauge their interest level in trading defensive end Dante Fowler., sources tell Manish Mehta of the Daily News. It’s not immediately clear whether the Jaguars are interested in such a deal. 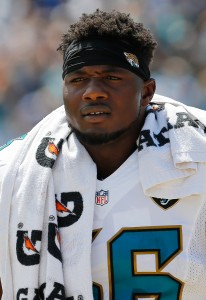 Fowler, the former No. 3 overall pick in the NFL draft, has immense talent, but also comes with baggage. The pass rusher has a history of off-the-field missteps and will be sidelined for the first game of the season after racking up three misdemeanor charges in a 2017 arrest. Fowler was also hit with an unusual preseason suspension this year for “fighting and violation of team rules.”

Jaguars boss Tom Coughlin isn’t one to tolerate such behavior, and that likely factored into the team’s decision to decline Fowler’s fifth-year option for 2019. Still, even as they declined the option, it was reported that the Jaguars had not ruled out a long-term deal with Fowler down the road. And the Jaguars could get a compensatory pick for Fowler if he leaves in free agency, so they won’t be giving him away to the Jets or any other team.

Fowler managed eight sacks last year, but the Jaguars were wary of committing to him after he missed all of his would-be rookie season and was a bit inconsistent in 2016.

The Jets could certainly use a talented pass rusher, and they haven’t shied away from problematic personalities over the last few years, so Fowler could be a logical fit.