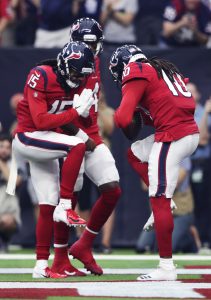 Fuller, 24, was on pace to have the best season of his career. Through seven games, he hauled in 32 catches for 503 yards and four touchdowns and reeled 71.% percent of all passes thrown to him by Deshaun Watson. The Texans will have to get by without Fuller’s production and the attention that he takes off of star receiver DeAndre Hopkins.

Since entering the league as a first-round pick out of Notre Dame in 2016, Fuller has missed eight possible regular season games. That number will grow to 17 after he misses the second half of the 2018 season.

The Texans are now expected to survey the free agent market for receivers. Many will connect the dots between the Texas team and Dez Bryant, but there are no indications that the Texans are interested in the veteran. Terrelle Pryor is also among those looking for work, and he says he’s healthy and ready to contribute.

Alternatively, the Texans could look to their practice squad for reinforcements. They currently have three receivers – Malachi Dupre, Cyril Grayson, and Issac Whitney – waiting in the wings.

8 comments on “Texans WR Will Fuller Done For Season”