Former Raiders defensive end Bruce Irvin has agreed to a one-year deal with the Falcons, according to a team announcement. The deal reunites Irvin with coach Dan Quinn and gives the veteran a chance at reaching the playoffs this season. 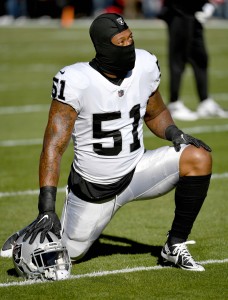 “This was a dream [come] true,” the Atlanta native told Vaughn McClure of ESPN.com (on Twitter). “The Patriots and Steelers offered more money, but being able to play for my city and my people, you just can’t put a price on that.”

The Seahawks also tried to sign Irvin, according to Ian Rapoport of NFL.com (on Twitter). But, rather than don his old uniform, Irvin decided to reconnect with the coach who helped mold him into one of the league’s most feared edge rushers.

Irvin’s new deal will pay him $1.5MM for the final eight games of the season, Rapoport adds (on Twitter). He also gets to collect on the full amount of his remaining Raiders salary, giving him a total haul of $9.75MM for 2018.

Irvin, 31, recorded 88 tackles, 8.5 sacks, five pass defenses, three interceptions and two touchdowns in his two seasons under Quinn in Seattle. The former No. 12 overall pick also had some success with the Raiders, but things took a turn this year under new head coach Jon Gruden.

The Raiders’ pass rush has been listless without Khalil Mack leading the charge, and Irvin was not his usual self, despite leading the team with three sacks at the midway point of the season. In his final game with the Raiders, Irvin played only nine snaps.

With the Falcons, Irvin will join a talented pass rush that includes former first-round picks Takkarist McKinley and Vic Beasley. On the whole, it’s a defense that has not been playing up to its potential. The Falcons are among the lowest-ranked defenses in the league and the front seven has registered just 17 sacks on the year.

Because he was released after the trade deadline, Irvin was subject to waivers. He went unclaimed due to his contract which called for him to earn $3.8MM the rest of the way. Naturally, he’ll earn less on his Falcons deal.

Irvin’s first game with the Falcons will come against the Browns on Sunday.