The Titans placed running back David Fluellen on injured reserve, according to a team announcement. To take his place on the roster, the club called up linebacker Nigel Harris from the practice squad. 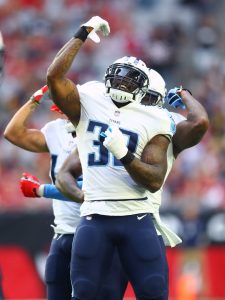 Fluellen has missed the past five gives with a knee injury and he didn’t recover as fast as the club had hoped. It’s not a huge blow to the Titans – Fluellen has just eight carries over the last two years – but it does impact their depth somewhat as they push for a playoff spot.

Harris, meanwhile, will join outside linebackers Derrick Morgan, Brian Orakpo, Harold Landry, Kamalei Correa, and Sharif Finch on the roster. He may have a chance to play this weekend since Orakpo and Finch have been ruled out for Saturday.

With wins over the Redskins and Colts in the next two weeks, the 8-6 Titans will be virtually assured a place in the postseason. There’s even hope of winning the division, though that would require two wins plus two Texans losses to close out the year.