Changes are coming in Buffalo, but LeSean McCoy is still a part of the team’s plans in 2019. This week, Bills GM Brandon Beane told reporters that Shady is staying put. 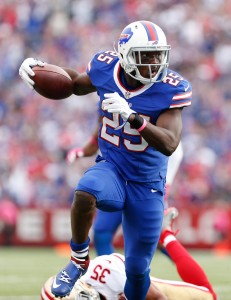 Beane also indicated in November that McCoy would be retained. The team’s belief in him, in some respects, is surprising. McCoy will turn 31 in July and he’s coming off of a season in which he averaged a career low 3.2 yards per carry and was hit with ugly accusations. The Bills, in theory, could dump McCoy to save $6.425MM against the cap with just $2.625MM left in dead money, but that move is apparently not in consideration.

For what it’s worth, McCoy also says that he’s happy in Western New York. Recently, McCoy said that while “a lot of teams” wanted to trade for him at this year’s deadline, he wants to stay put and be a part of the team’s future.

McCoy still offers serious burst and cutting ability, even at his advanced age, so there’s reason to believe that he can get back to his old form in 2019. The veteran would also benefit from a beefing up of the offensive line.