The Browns decided to stay in-house. Or, more accurately, in the kitchen. On Wednesday afternoon, the Browns will formally announce the promotion of offensive coordinator Freddie Kitchens to the head coaching position, according to ESPN.com’s Chris Mortensen (on Twitter). 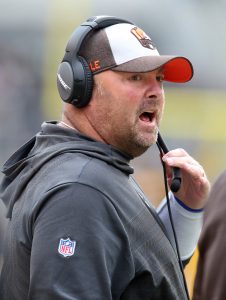 Kitchens proved his value after an in-season promotion gave him the keys to the Browns’ offense. Under Kitchen’s tutelage, rookie quarterback Baker Mayfield thrived and became a legitimate contender for the league’s Offensive Rookie of the Year award. The Browns closed the season 5-3 with Kitchens donning the headset and it appears that he is being given more credit for the turnaround than interim head coach Gregg Williams.

Early on, the Browns were connected to some big-name coaching candidates such as former Packers coach Mike McCarthy and Patriots offensive coordinator Josh McDaniels. The Browns did not seriously pursue either coach, choosing instead to talk with Williams, Jim Caldwell, Dan Campbell, Matt Eberflus, Brian Flores, Mike Munchak, Nick Sirianni, and Kevin Stefanski.

Stefanski, the Vikings’ offensive coordinator, was believed to be a finalist alongside Kitchens. Ultimately, he lost out, which means that Brad Childress is probably not on his way back to Cleveland after all.

17 comments on “Browns To Hire Freddie Kitchens As HC”