When the Buccaneers agreed to hire Bruce Arians, the NFL informed them that they would not need to send compensation to the Cardinals. Later, the Cardinals told the league office that they believed they still had a claim to his rights. In order to avoid a protracted argument, the Bucs have agreed to trade a sixth-round pick to the Cardinals in exchange for Arians’ rights and a seventh-round pick. 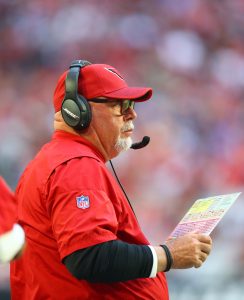 Ultimately, the Bucs probably could have avoided giving up compensation, particularly since they previously got the green light from the league office. However, they want to hit the ground running with Arians, so they made a small concession enabling them to keep things simple.

The Bucs lured Arians out of retirement with a four-year deal that includes a team option for a fifth season. Already, much of Arians’ staff appears to be in place with Todd Bowles serving as the as the defensive coordinator, Byron Leftwich as the passing-game coordinator, and Harold Goodwin as the run-game overseer.