The Jets have agreed to hire former Dolphins head coach Adam Gase for the same position, according to Adam Schefter and Jeff Darlington of ESPN.com (Twitter link). 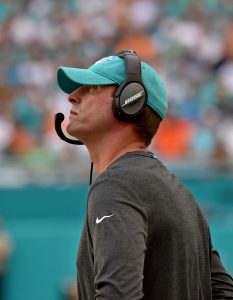 Gase will stay in the AFC East, where he led Miami to a 23-25 record from 2015-17. That tenure only included a single postseason appearance, a first-round loss in his rookie campaign. But Gase, 40, earned glowing reports as an offensive coordinator with the Broncos and Bears earlier in his career, as he helped Peyton Manning and Jay Cutler to immensely successful seasons.

Once viewed as something of a “quarterback whisperer,” Gase will now be tasked with continuing the development of 2018 No. 3 overall pick Sam Darnold, who showed flashes during his first NFL go-round. He’ll also inherit an interesting offensive corps, with weapons such as receiver Robby Anderson and tight end Christopher Herndon at his disposal. And the Jets, who rank second in projected 2019 cap space with nearly $100MM at their disposal, should be likely to reinforce their roster via free agency.

As PFR’s Head Coaching Search Tracker shows, the Jets had been one of just three teams without a head coach in place. With Gase on board in New York, only the Bengals and Dolphins have yet to find a new head coach.

Before hiring Gase, the Jets interviewed a number of intriguing candidates:

Kingsbury landed the Cardinals’ head coaching job, while others like Bieniemy, Monken, and Richard each still candidates for either the Cincinnati or Miami position. But of the remaining vacancies, McCarthy was only interested in New York, so he’s now likely to wait until 2020 to find another head coaching gig.

48 comments on “Jets To Hire Adam Gase As Head Coach”