The Jets will interview Buccaneers offensive coordinator Todd Monken on Tuesday, according to Rich Cimini of ESPN.com (on Twitter). The Jets made their request to talk with Monken recently and the Bucs did not stand in the way since Monken is likely on his way out no matter what. 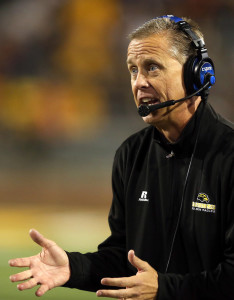 The Buccaneers are the midst of their own head coaching search, but they eliminated Monken from the pool when they announced that no internal candidates would be considered from the post. Monken, theoretically, could stay as the offensive coordinator under a new regime, but Monken has little incentive to wait and around and find out if the Bucs’ next head coach wants him.

The Bucs fell flat in 2018, but the offense did have its moments under Monken. It’s also worth noting that Monken was the runner-up in Green Bay before that job went to Matt LaFleur.

The Jets have already met with Mike McCarthy, Kris Richard, Jim Caldwell, Matt Rhule, Eric Bieniemy, Adam Gase, and Kliff Kingsbury. There’s a belief that Rhule is high on the Jets’ list, but it would be a gutsy move to choose him over some of the other names on this list.