The Jets are set to interview Buccaneers offensive coordinator Todd Monken on Tuesday, but it sounds like they might get a crack at Baylor’s head coach before that. CBS Sports’ Jason La Canfora says he continues to hear that the Jets will talk to Matt Rhule about their head coaching opening prior to their Tuesday interview with Monken (Twitter link). 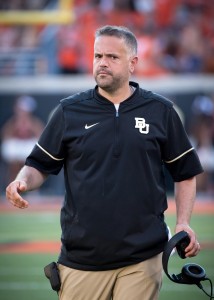 We heard last week that the Jets were eyeing the Baylor head coach, but it was uncertain if the organization had scheduled an interview. The team was in Texas today to interview Cowboys assistant Kris Richard, so they could easily pull off another meeting in the next 24 hours.

Besides a brief 2012 stint as the Giants’ offensive line coach, Rhule has spent the majority of his career in the NCAA. Rhule was head coach at Temple for four seasons, where he led the Owls to their only back-to-back 10-win seasons in school history. He joined Baylor in 2017 and didn’t see similar results, as the Bears finished with a 1-11 record during his first season. However, Baylor improved in 2018, finishing 7-6.

The 43-year-old has been on the NFL radar for at least a year. Last offseason, the Colts eyed Rhule as a head coaching candidate before the Josh McDaniels fiasco.

Rhule is the eighth known candidate for the Jets’ post. This total doesn’t include Iowa State head coach Matt Campbell, who declined the team’s interview request.