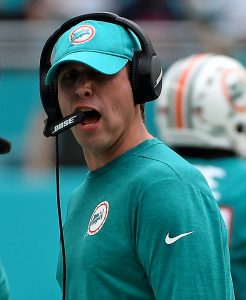 Gase, who went 23-25 with the Dolphins in three seasons, wrapped up two interviews this week after meeting with the Cardinals and Jets. The 40-year-old Gase is an innovative offensive mind who rose to fame as the orchestrator of Denver’s dynamic offense during Peyton Manning‘s tenure with the team. In three years as the Broncos’ offensive coordinator, the team posted a pair of top-five offenses, including a No. 1-overall ranking in 2013 when Manning set the records for passing yards and touchdowns in a season. That type of offensive mind fits the mold of what the Packers are expected to want in a head coach to pair with Aaron Rodgers.

According to Pro Football Rumors’ head coaching search tracker, Gase will push the Packers’ number of interviews that are scheduled and expected to near double digits. That search includes other offensive minds like Josh McDaniels and Dan Campbell, as well as a host of former head coaches like Jim Caldwell and Chuck Pagano.