Case Keenum is be D.C.-bound. On Thursday, the Redskins and Broncos hammered out a trade to send the quarterback to Washington, as Ian Rapoport of NFL.com tweets. 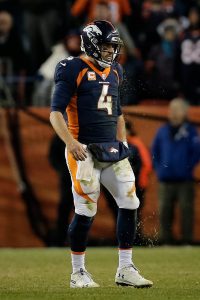 The trade will send Keenum and a Broncos 2020 seventh-round pick to D.C. in exchange for a 2020 sixth-round pick, according to Mike Klis of 9News (on Twitter). Meanwhile, Keenum has agreed to rework his contract in order to facilitate the deal.

Keenum had the opportunity to earn $21MM in ’19 under the terms of his old contract, but the revised pact will give him $7.5MM in total. The Broncos will pay Keenum a $500K restructure bonus and contribute $3.5MM towards Keenum’s $7MM salary. Meanwhile, Washington will pay their $3.5MM half of the tab. Ultimately, the Broncos saved themselves a few million and the Redskins found an inexpensive veteran to compete with Colt McCoy for the starting gig.

Keenum, 31, joined the Broncos on a two-year, $36MM deal prior to the 2018 campaign. Unfortunately, his season with Denver did not go as planned as the Broncos slumped to a 6-10 mark. This offseason, he was squeezed out of his starting job when the Broncos acquired Joe Flacco from the Ravens.

With the Redskins, Keenum may have an opportunity to take over for Alex Smith, who is fighting his way back from a gruesome leg injury. He’s not long removed from leading the Vikings to the NFC Championship Game during a 2017 season in which he ranked second in Total QBR, seventh in adjusted net yards per attempt (the passing metric most correlated with winning), fifth in interception percentage, and seventh in sack percentage.

On the flipside, Keenum’s 2018 marks tell a different story. Among 33 qualifying quarterbacks, Keenum finished 30th in Total QBR, 28th in ANY/A, 21st in interception percentage, and 11th in sack percentage. A year after ranking first in Football Outsiders‘ DVOA (meaning he was extremely effective on a per-play basis), Keenum fell all the way to 29th in 2018.

With the No. 15 pick in the draft, the Redskins are unlikely to land either Kyler Murray or Dwayne Haskins, so a short-term solution such as Keenum might make the most sense for them. There’s also the free agent market to consider, but Smith’s $20.4MM cap hit could be prohibitive in the pursuit of someone like Nick Foles.

29 comments on “Broncos To Trade Case Keenum To Redskins”