Brandon Graham isn’t reaching the open market after all. On Friday, the Eagles agreed to a new three-year deal with the defensive end that will pay him $40MM, Ian Rapoport of NFL.com tweets. 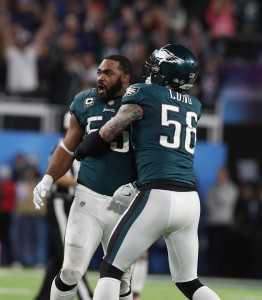 It’s a solid payday for Graham, who will bank north of $13MM per season on average. Meanwhile, he has a real chance to retire in Philadelphia. Graham will celebrate his 31st birthday in April, and the Eagles can safely focus on areas other than the pass rush later in the month.

Earlier this offseason, Graham indicated that he would probably test the open market rather than inking a new deal with Philadelphia before March. However, the Eagles came to the table with a deal that made sense for the veteran.

“I love Philly but I owe it to myself and my family to explore free agency,” Graham said in January. “I’m in the business of doing what’s best for my family. I need to explore the market.”

Graham, who’s been with the Eagles since 2010, inked a four-year deal with Philly in 2015. He’s discussed a potential extension on numerous occasions with the Eagles since then, but a fresh deal never came to fruition until now. The Eagles added extra incentives to his pact heading into the 2017 campaign, but did not otherwise amend his deal over the past four years.

Graham would have drawn serious interest in the open market, but he also would have been going up against a stacked free agent edge defenders group. Players such as Jadeveon Clowney, Frank Clark, DeMarcus Lawrence, Dee Ford, and Trey Flowers are all candidates for the franchise tag, but Graham got enough money to bypass the hassle of free agency and stay with the only NFL team he’s ever known.