The Jets are making another big splash. Shortly after agreeing to terms with Anthony Barr, the Jets are expected to sign inside linebacker C.J. Mosley to a five-year deal, according to Ian Rapoport of NFL Network (Twitter link). 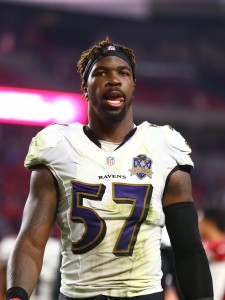 The pact will pay Mosley a whopping $85MM, with $51MM in guaranteed money. We knew Mosley was going to cash in, but this is a truly massive number. As Tom Pelissero of NFL Network pointed out in a tweet, Luke Kuechly‘s deal with the Panthers had previously set the market for inside linebackers, with Kuechly making just over $12MM per year. Mosley will have an average salary of $17MM.

When Kwon Alexander, coming off a torn ACL, landed a four-year $54MM deal from the 49ers yesterday, it was a clear sign Mosley was about to break the bank. The acquisition of Mosley will make it easy for the Jets to move on from Darron Lee. We heard last night the Jets were looking to part ways with the 2016 first round pick.

Jets GM Mike Maccagnan has been saying for months the team was going to be aggressive in free agency, and they’ve been exactly that. Mosley’s contract is by far the biggest ever for an inside linebacker. Mosley is still only 26, and young players like him don’t hit the open market too often.

He’s made the Pro Bowl in four of his five seasons in the league, and is a great addition to New York’s rebuilding defense. New defensive coordinator Gregg Williams is remaking the defense in his image, and has added Mosley to his core of safety Jamal Adams, Barr, defensive lineman Leonard Williams, and fellow inside linebacker Avery Williamson. The Jets have another opportunity to upgrade the defense with the third overall pick in this year’s draft.

The Ravens opted not to franchise-tag Mosley, and have now lost several players from their defense. In addition to Mosley, they let linebackers Terrell Suggs and Za’Darius Smith walk, as well as safety Eric Weddle.