Panthers veteran left tackle Matt Kalil has been released, a source tells Ian Rapoport of NFL.com (on Twitter). The Panthers will cut him with a post-June 1 designation, saving the club roughly $7MM this year. After that, they’ll eat $5MM in 2019 and $9MM in 2020. 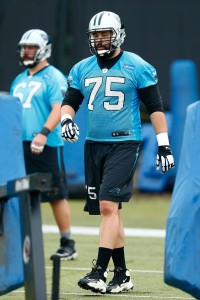 Kalil signed a higher-than-expected five-year, $55MM contract with the Panthers in 2017 and that deal still had guarantees going into 2019. The left tackle leaves Carolina after appearing in just 16 games (all in ’17).

Ultimately, this amounts to a cut-your-losses maneuver. The Panthers have a new owner in David Tepper, and the GM that authorized the Kalil contract, Dave Gettleman, is now with the Giants. Effectively, the club’s new decision makers are willing to chalk up Kalil’s deal – and the associated penalties – to a bad move by the old crowd.

Kalil has spent all of the 2018 season on injured reserve. After being taken out by the right knee injury, Chris Clark took over his spot. Next season, right tackle Taylor Moton could switch sides to man LT.