Earlier this week, the Steelers agreed to trade Antonio Brown to the Raiders in exchange for a third- and fifth-round pick in this year’s draft. However, that deal wouldn’t have even materialized if a reported Pittsburgh/Buffalo deal hadn’t fallen apart. 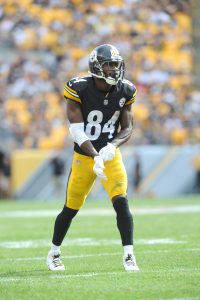 Appearing on the Dan Patrick Show, Raiders general manager Mike Mayock said he initially told the Steelers that he was “not interested” in making a deal for the wide receiver. When Pittsburgh was willing to drop their asking price (and when trade talks with the Bills broke down), the two sides ended up agreeing on a trade.

“I kept saying we’re not interested,” Mayock said (via Andrew Perloff of the Dan Patrick Show on Twitter). “Then the Buffalo thing fell through. One of their guys reached out to Jon [Gruden]. … [Steelers GM] Kevin [Colbert] said to me, would you trade your two? I said no, but we might trade our three.”

The GM said similar things to Mike Florio earlier this week. Despite there potentially being two additional suitors for Brown, Mayock and the Raiders were still able to pull off the deal.

On the flip side, the Bills weren’t able to pull off a trade for Brown. Reports from last week indicated that Buffalo was on the cusp of acquiring the star wide receiver, but the deal ultimately broke down. While there have been several reports that the deal was nixed because of Brown’s unwillingness to play in Buffalo, Bills general manager Brandon Beane continues to claim that it was his decision to not make the trade. The executive told reporters (including ESPN’s Mike Rodak) that talks with Pittsburgh were “positive all around,” but the organization ultimately “just decided to withdraw.”

Brown’s decision to not join Buffalo has led some to claim that the Bills are not a free agent destination. Beane was quick to dismiss that “narrative,” saying the opinion “started with a bad rumor on the Antonio Brown thing when people were looking for reasons and didn’t have all the facts.”

“Don’t speak about Buffalo if you don’t know what this city and fan base is like,” Beane said. “It really pissed me off. It’s not true. How many [free agent signings] flowed through here today? … I can’t tell you how many players commented ‘This is amazing. This is awesome. What a facility. What a culture.’ This city, we love it. Anybody that says that doesn’t know Buffalo and really is speaking out of ignorance.”

The Bills have been relatively active in recent days. The added a pair of wideouts in Cole Beasley and John Brown, and they’ve also added Mitch Morse, Frank Gore, Kevin Johnson, and Tyler Kroft.