Although the Ravens would like to re-sign Terrell Suggs, the veteran pass rusher will have a solid market in free agency, according to Jason La Canfora of CBSSports.com (Twitter link), who adds there is a “very real possibility” Suggs will not be in Baltimore in 2019. 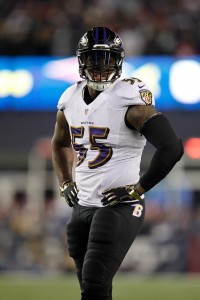 The Ravens had made Suggs an offer, tweets La Canfora, but the two sides aren’t close on the numbers. While Baltimore expects to continue conversations with Suggs, there is no deal considered imminent. Although Suggs is entering his age-37 campaign, he’s given no hint that he’s ready to retire, and fully plans to continue his career next season.

The Cardinals could become a destination for both Suggs and fellow Ravens free agent C.J. Mosley, as La Canfora writes in a separate piece that the some of the duo’s Baltimore teammates believe the pair could head to the desert. The Ravens opted not to use the franchise tag on Mosley, which would have allowed him to collect a fully guaranteed salary of $15.443MM next year.

Despite his advanced age, there aren’t many signs Suggs is slowing down. He played 744 defensive snaps in 2018, second-most among Baltimore’s front seven defenders (trailing only Mosley). During that time, Suggs posted seven sacks and ranked as the NFL’s 36th-best edge defender among 103 qualifiers, per Pro Football Focus.