The Texans have agreed to sign former Broncos cornerback Bradley Roby, according to James Palmer of NFL.com (on Twitter). It’s a one-year deal worth $10MM, a source tells Palmer. 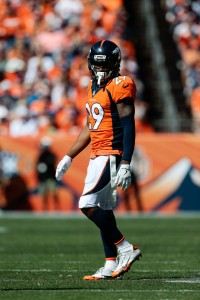 This marks a key investment for the defending AFC South champions, who saw two key members of their 2018 secondary defect. Kareem Jackson is likely set to take Roby’s place as the Broncos’ No. 2 cornerback. Roby’s deal illustrates both the cornerback market and his uneven contract year.

Denver’s nickel man for four seasons behind Chris Harris and Aqib Talib, Roby struggled as a full-time player in 2018. He played a key role for the Broncos’ dominant Super Bowl defense and an elite pass coverage crew a year later, but the former first-round pick probably could have secured a long-term deal with a better contract year.

Houston does not have much in the way of long-term pieces at corner, having Roby on a one-year deal and Johnathan Joseph going into his age-35 season. The Texans never received a quality return on their Kevin Johnson investment and is now without Jackson, who was the longest-tenured Texan on last year’s team. Houston also benched Aaron Colvin last season, so more moves may be coming for the Texans at this position — either through free agency or the draft.

For Roby, this is a chance to re-establish his value. While a $10MM accord is a solid payday, it’s a fraction of what the soon-to-be 27-year-old defender could earn if he bounces back next season.