The 49ers are shopping Solomon Thomas, according to Mike Florio of PFT (on Twitter). This comes as a bit of a shock considering that Thomas was the No. 3 overall pick in the 2017 draft. 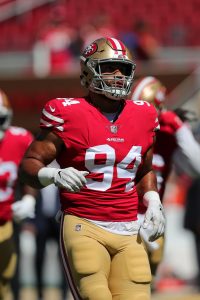 Thomas, still only 23, hasn’t lived up to his draft billing thus far. As a rookie, Thomas managed three sacks and 41 tackles, but last year he registered only one sack with 31 total stops.

Thomas showed improvement from Year One to Year Two, according to the advanced metrics at Pro Football Focus, but still didn’t perform at the level you’d expect from a No. 3 overall pick. He earned a 64.0 overall grade from PFF, putting him in a three-way tie as the No. 63 ranked edge defender in the NFL last year. That’s lightyears behind where new pickup Dee Ford (No. 11) and Arik Armstead (No. 26) placed.

Thomas’ rookie deal calls for him to earn paltry base salaries of $645K and $735K in each of the next two seasons. Next year, the 49ers (or whichever team may acquire him) can pick up his pricey fifth-year option for the 2021 season. At this rate, Thomas doesn’t seem on track for that, but he could turn things around with a strong showing in ’19.