The Packers intend to exercise the fifth-year option on Kenny Clark‘s contract, GM Brian Gutekunst says (Twitter link via ESPN.com’s Rob Demovsky). The Packers technically have until the May 3 deadline to formally make the move. 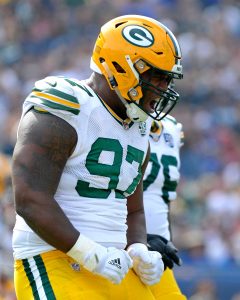 Last year, Clark enjoyed a solid third pro season. The 23-year-old (24 in October) put up a career-high six sacks and matched his 2017 tackles total with 55. Unfortunately, his season was halted by an elbow injury in December, but he was Pro Football Focus’ No. 9 ranked interior lineman in the NFL when he was placed on IR.

After a strong showing in 2018, picking up Clark’s option was something of a no-brainer for Green Bay brass. With the move, the young standout will be under contract through the 2020 season.

You can keep track of every fifth-year option decision in the NFL with PFR’s handy tracker.

One comment on “Packers To Exercise Kenny Clark’s Option”