Recent reports indicated that the Texans and Jadeveon Clowney haven’t made any progress on a long-term deal. However, general manager Brian Gaine said the two sides are still working on completing negotiations before the July 15th deadline. 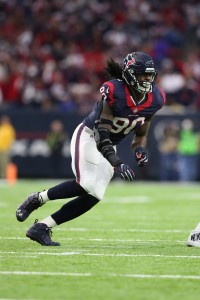 “That’s the spirit of the franchise tag,” Gaine told Deepi Sidhu of HoustonTexans.com. “You know, there’s a reason why we did that with every hope and intention to continuing to work on that. That’s a negotiation, it’s a process. It has to be a deal that makes sense for both sides, for the player, for the organization as it relates to short term and long term. That’s still the plan.”

The Texans franchised Clowney last month, and the pass-rusher subsequently decided to skip out on the team’s offseason program. When those reports surfaced, we also heard that “no deal is in sight or expected anytime soon.” Clowney is set to make $15.44MM on the franchise tag in 2019. The two sides have until July 15th to negotiate an extension, per league rules. If the two sides don’t agree on a new deal, Clowney would have to play next season under the tag (or he could follow the Le’Veon Bell route and sit out the entire campaign).

Considering Clowney’s recent production, the 26-year-old should expect a lucrative contract. The former first-overall pick compiled nine sacks in 15 games last season, and he ultimately graded out as Pro Football Focus’ tenth-best edge defender. Some pundits believe that the deal Demarcus Lawrence just got from the Cowboys is a good sign for Clowney, and others believe that Frank Clark‘s standoff with the Seahawks could also provide some clarity.