As expected, the Bears have picked up the fifth-year option on outside linebacker Leonard Floyd (Twitter link via ESPN.com’s Field Yates). The former first-round pick is now under club control through the 2020 season. 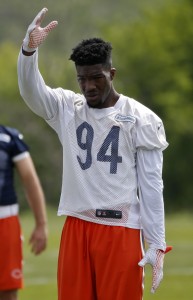 Floyd, who has registered 15.5 sacks through three seasons, is slated to earn $13.3MM in 2020. The additional year is guaranteed for injury only, so the Bears could theoretically escape the additional season without cap consequences if Floyd is able to pass a physical heading into the ’20 campaign.

Floyd, the ninth overall pick in 2016, played in all 16 games last season, marking his first ever campaign with perfect attendance. While he managed a career-low four sacks, Floyd ranked 31st among pass rushers with 30.5 quarterback pressures, according to Sports Info Solutions’ charting data. He also put up nine tackles for loss, 11 quarterback hits, and graded as the NFL’s No. 45 edge defender among 105 qualifiers, per Pro Football Focus.

Floyd is eligible for a contract extension after completing his third NFL season, but the Bears have plenty of time to cross that bridge.