The Colts have signed quarterback Chad Kelly, according to a team announcement. In a related move, the Colts waived defensive tackle Jordan Thompson to make room. 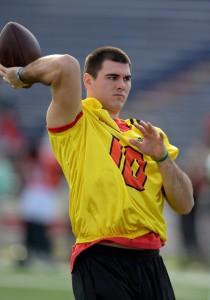 Kelly attended the team’s rookie minicamp as a tryout player earlier this month and showed enough to get a longer look. Given his history, this could be his last opportunity to make things work in the NFL.

Kelly was once considered one of the top QB prospects in the nation, but he was kicked out of Clemson and his senior season at Ole Miss was cut short by a torn ACL and lateral meniscus. The Broncos made him “Mr. Irrelevant” in 2017 with the final pick in the draft, but he had an opportunity to be very relevant and supplant Case Keenum as the club’s starter in 2018. That never came to fruition thanks to a bizarre October arrest and his subsequent release.

With the Colts, Kelly will try to stick as a backup behind Andrew Luck and Jacoby Brissett. Brissett is likely to pursue a starting job next offseason, so Kelly could conceivably have a path to being the No. 2 QB behind Luck in 2020 if all goes well.