Julian Edelman has agreed to a two-year extension with the Patriots, according to Ian Rapoport of NFL.com (on Twitter). The new pact will potentially take the wide receiver through the end of his career and allow him to retire in New England. It also comes with a pay bump – Edelman will receive $18MM in new money over the course of the two-year add on, giving him $21MM throughout his remaining three years, according to Tom Curran of NBC Sports Boston. 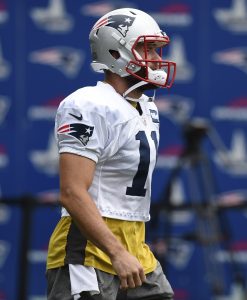 The deal comes with $8MM signing bonus and $12MM guaranteed, Mike Reiss of ESPN.com (on Twitter) hears. All in all, Edelman will earn an average annual value of $7MM, which is a solid bargain for the Patriots. Even when calculating his extension via the “new money” average, Edelman’s $9MM puts him outside of the league’s top 20 highest-paid receivers.

Edelman, who turns 33 on Wednesday, had another productive season in 2018. After missing the first four games of the season due to a ban for PEDs, the veteran amassed 74 catches for 850 yards and six touchdowns. Had he produced at the same rate over the course of a full 16-game season, Edelman would have registered something close to a 93/1063/8 stat line, which is not far off from his best single season performances.

Edelman has spent his entire career with the Patriots since entering the league as a seventh-round pick (No. 232 overall) in 2009. He was quietly productive in his rookie season, but he truly broke out in 2013 with 105 grabs for 1,056 yards and six TDs. Over the years, Edelman has captured three Super Bowl rings with New England, including February’s 13-3 win over the Rams in which he took SB MVP honors.

Edelman’s career seemed to be in doubt just a couple of years ago – the wide receiver lost the entire 2017 season to a torn ACL and had to sit out the first month of the ’18 season due to his suspension. However, he came back strong and he now has a deal that should allow him to retire with the only NFL franchise he’s ever known.