Last week, the Jaguars inked wide receiver Terrelle Pryor shortly after he auditioned on the practice field. We now have the details on the deal, courtesy of ESPN.com’s Michael DiRocco (Twitter link): it’s a one-year, $930K veteran’s minimum contract. 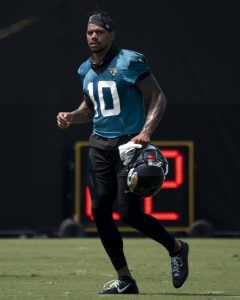 There’s little risk in the deal for the Jaguars as they have added a one-time 1,000-yard receiver for next to nothing. And, if Pryor can’t prove that he is healthy in camp, they can walk away with no fiscal penalty.

It’s probably not the deal Pryor envisioned for himself, but the former Browns standout has earned more than $14MM over the course of his career, thanks in large part to recent pacts with the Redskins and Jets.