The Redskins have officially wrapped up their 2019 NFL Draft class. On Thursday, the club announced the signing of third-round wide receiver Terry McLaurin. 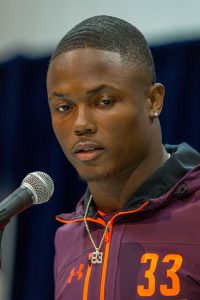 McLaurin’s 35 catches for 701 yards last year don’t necessarily jump off of the page, but he proved to have a presence in the red zone with eleven touchdowns. After selecting Ohio State quarterback Dwayne Haskins in the first round, the Redskins are hopeful they can keep the chemistry going at the pro level. For now, he projects to sit somewhere behind Josh Doctson, Paul Richardson, Trey Quinn, and Cam Sims on the wide receiver depth chart. Fellow rookie receiver Kelvin Harmon will also battle for playing time, but McLaurin’s special teams acumen should work in his favor.

Here’s the full rundown of the Redskins’ draft class, courtesy of PFR’s tracker: