The Bengals are signing wide receiver Tyler Boyd to a four-year, $43MM extension, league sources tell ESPN.com’s Adam Schefter (on Twitter). Boyd now will be under contract through the 2023 season. 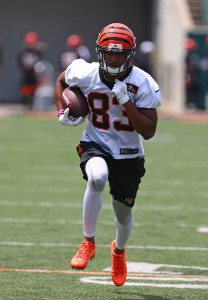 Prior to the deal, Boyd was set to play out the 2019 season before reaching free agency. Under the new pact, the Bengals have added four more years while Boyd has put himself in the top 20 at his position, in terms of new money average annual value. Furthermore, he’s now one of the league’s highest-paid slot receivers.

Following a pair of underwhelming seasons to begin his career, Boyd had a breakout campaign in 2018, hauling in 76 receptions for 1,028 yards and seven touchdowns in 14 games. Part of his production could be attributed to the fact that A.J. Green missed seven games, placing Boyd atop the depth chart. On the flip side, the receiver also established a career-high catch percentage and yards-per-target.

The deal is similar that of Sterling Shepard‘s contract with the Giants, which was a four-year deal worth $41MM ($21.3MM guaranteed), a watermark that Boyd personally said he had in mind. We’re still waiting on the full details, but the contract may also mirror the one Tyrell Williams signed with the Raiders (four years, $44MM ($22MM guaranteed)).

As our own Dallas Robinson previously pointed out, Boyd topped Shepard in every offensive category this past season, and he finished higher than the Giants wideout in both Pro Football Focus‘ positional grades and Football Outsiders’ receiving metrics. Boyd’s 2019 season was comparable to Williams’ 2016 campaign, although Williams was older and coming off a pair of subpar seasons when he signed his recent deal with Oakland.

With Boyd’s contract addressed, the Bengals’ focus now must shift to Green, who has one year to go on his deal. Despite Green’s recent injury trouble, both sides have expressed a strong desire to get something done.