Jadeveon Clowney To Report To Texans In Late August

Jadeveon Clowney has made it known he plans to return to the Texans before their first week of regular-season practice. The franchise-tagged edge defender will be back in August. 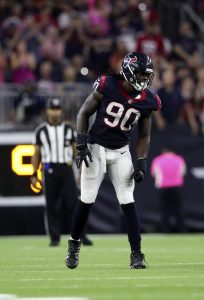 The sixth-year standout plans to report following Houston’s third preseason game, Ian Rapoport of NFL.com reports (video link). Clowney will not play in the Texans’ fourth preseason contest but will get some extra work in with his teammates before suiting up in Week 1.

A previous report indicated Clowney would show up before the Texans’ regular-season opener against the Saints, but it looks like he will try to get a bit more work in before then. The Texans play their third preseason game Saturday, August 24, so they will be set to have their full team at practice between then and August 29.

As could be expected, the 26-year-old standout has worked his way into good shape on his own this offseason. He has remained in contact with Texans players and coaches, despite the team opting not to finalize an extension with him. Clowney has been extension-eligible since January 2017 but will still be without a long-term deal by season’s end. A grievance about Clowney’s tag amount (currently at the linebacker rate of $15.967MM) has also been rumored. But the Texans will nonetheless see their top J.J. Watt sidekick earlier than initially expected.

The Texans reportedly did not offer the former No. 1 overall pick a deal in line with those fellow franchise-tagged edge players DeMarcus Lawrence and Frank Clark received, and it was reported Bill O’Brien and since-fired GM Brian Gaine had a difference of opinion regarding a long-term Clowney contract. O’Brien was said to be against it.