The Lions have reached agreement on a one-year contract extension with defensive tackle Damon Harrison, according to Adam Schefter of ESPN.com (Twitter link). The extra year will keep him under contract with Detroit through 2021 and is worth $11MM. Harrison will collect $12MM guaranteed from 2019-2020, per Schefter. 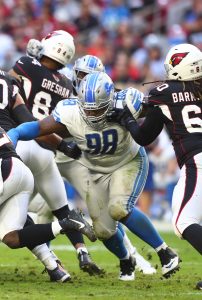 Harrison, 30, had been asking the Lions for a new contract since at least March, and Detroit seemed open to the idea from the start. “Snacks” skipped all non-mandatory Detroit practice sessions during the summer, but showed up for training camp at the end of July and was activated off the non-football injury list last week.

NFL players rarely earn (or even seek) extensions with two years remaining on their current deals, but Harrison is an immensely valuable part of the Lions defense. Detroit acquired Harrison from the Giants at the 2018 trade deadline in exchange for a fifth-round pick, and he started 10 games for the Lions down the stretch.

Harrison posted 50 and 3.5 sacks for the Lions while grading as the NFL’s third-best interior defender behind only Aaron Donald and Fletcher Cox, per Pro Football Focus. PFF ranked Harrison as the league’s single-best run-stopping defensive tackle, and as Field Yates of ESPN.com tweets, Harrison has led the all NFL interior defenders in tackles in each of the past four seasons.

Harrison was scheduled to earn $6.75MM and $9MM in 2019 and 2020, respectively. At present, it’s unclear how or if the Lions will adjust those amounts, simply give Harrison a signing bonus, or use some other financial method to reward the veteran defensive tackle.