Browns running back Kareem Hunt will return to practice on Monday, per a club announcement. Hunt must still serve two more games on his eight-game suspension, but he is apparently healthy enough to scrimmage. 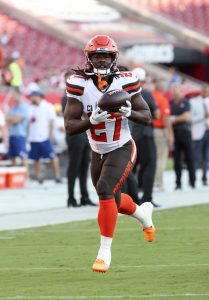 Hunt spent the early part of the season recovering from sports hernia surgery, which overlapped with the first six games of his eight-game ban. The suspension stemmed from an ugly recording in which Hunt threw a woman to the ground in a hotel corridor. Despite the controversy around Hunt, the Browns picked up the ex-Chiefs running back with the belief that he would change his ways and improve their running game.

Hunt, for his part, vowed to get back on track.

“I want to again apologize for my actions last year,” Hunt said in a statement after his suspension was announced in March. “I know that my behavior hurt a lot of people, and I again apologize to them. I respect the league’s decision on discipline, and I appreciate the time I spent with Commissioner Goodell last week. I’m grateful for my time with the Browns over the last month and thankful to all the people in the organization that have welcome me. I also appreciate all of the support I received from my union through this process. My commitment to earning the trust of the league, my teammates, the organization, and this community through my actions will continue, and I understand there is a lot of work ahead of me before I’m able to fully return to playing the game I love.”

If he’s healthy and ready to go, Hunt will be able to make his debut in Week 10 against the Bills. The third-year pro will look to build off of career totals of 2,151 yards and 15 touchdowns rushing, plus 79 catches for 833 yards and ten scores via the air.