The Rams have traded cornerback Marcus Peters to the Ravens for linebacker Kenny Young, according to NFL.com’s Ian Rapoport (on Twitter). The Rams will also receive a 2020 fifth-round pick in the deal, Adam Schefter of ESPN.com tweets. 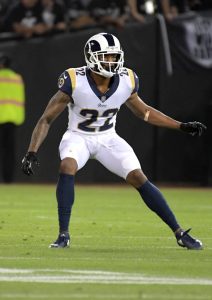 The trade comes on the heels of another smaller swap, which saw the Rams ship a 2021 draft pick to the Browns for guard Austin Corbett. Clearly, after a three-game slide, the Rams eager to shake things up.

Peters, 26, is in the fifth year of his rookie contract. This season was supposed to be Peters’ chance to secure a lucrative extension with the Rams. Instead, he’s starting over with the third team of his young career. The Rams would have likely fetched a third- or fourth-round pick for Peters, via the compensatory process, in 2021. They agreed to land Young and a fifth-rounder that will come a year earlier.

After this season, the Ravens will have the opportunity to franchise tag Peters, which would cuff him at approximately $17MM. Or, if they choose, they can allow Peters to test, or walk, in free agency. For now, the Ravens have him at a reasonable cap figure of $9.069MM.

In 2018, Peters showed serious flashes of promise, including a strong showing in a Super Bowl that was otherwise ugly for L.A. Still, he lacked consistency throughout the year, and he has a rep for being difficult with coaches.

With the Ravens, Peters will help secondary that lost defensive backs Tavon Young, Tony Jefferson, and DeShon Elliott for the year. Meanwhile, cornerback Maurice Canady is day-to-day with a hamstring injury.

“The next game is critical,” head coach John Harbaugh said on Monday (via the Associated Press). “It won’t make or break us, but it will go a long way in setting us up for where we’re heading down the road and what kind of season we’re going to have.”

Harbaugh wasn’t kidding – the Ravens went out and got serious firepower in advance of their matchup against the Seahawks. Meanwhile, the Rams will add Young, a 2018 fourth-rounder who notched 2.5 sacks last season, to the mix.